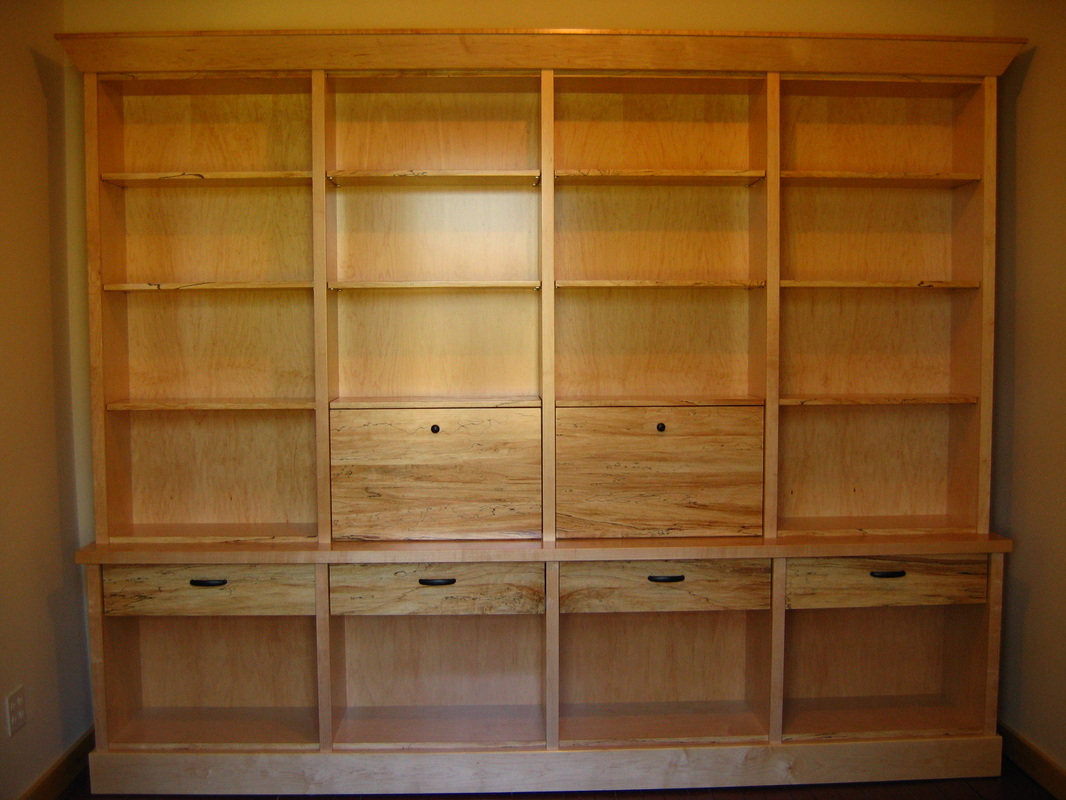 My good friends not far up the road are quite environmentally minded. (Applause.) So it was quite in-line for them to ask their local furniture designer/maker-extraordinaire to make a custom wall unit using the wood from a large maple that had come down on their property. Yes, I had yet another chance to play with spalted maple and use it to make some beautiful hi-lites on this piece.

As always, once the log was sawn up and I went to pick up the boards, it was not easy to see full sections that were still intact and where the spalting (rotting essentially) had not progressed too much. Also, I was not surprised that the character of the spalting "graphics" had a character that was unique. And, I was also not surprised again to see that the spalting was intense in some areas and completely absent in others. Yes, I'm getting to know this strange animal.

The patterns in this one had much of a "Japanese Script", as if inscribed with a fine Indian Ink pen. It had quite a personality. Some spots looked like someone had deliberately marked off areas and then very accurately coloured them in. Sorry, but this just continually blows me away.

The base of the finished piece was leveled on the not-so-level farmhouse floor with accurate hardware, and then the rest started to solidly tower above. In the bottom sections there is a bank for a better than average collection of vintage vinyl, then a drawer on full extension silent slides.

Then above, in the middle two bays, there are fold down fronts that work as serving areas for a much better than average collection of  single malt scotch. Therefore the "rotting wood" was in keeping with the peaty good stuff. (He's a great guy to visit.)

Books fill the rest of the space on solid maple shelves that will not sag. I managed to locate a long single piece of birdseye maple to top off the crown. Nice.

In the last last pic, you'll see a pile of edging I was making on the table saw; there's not too many pieces that have desirable pattern, but a few stand out suddenly in spots. I found them and used them.

If you want a piece of anything made of spalted maple, buy it when you see it. Or, provide a tree full of it to be carefully extracted. Don't expect that you can order a certain look of spalted maple; I'd say it's more unique than people are.    Ya, I'm a woodie.

(Note to Spell Check:  Spalting is a word!)