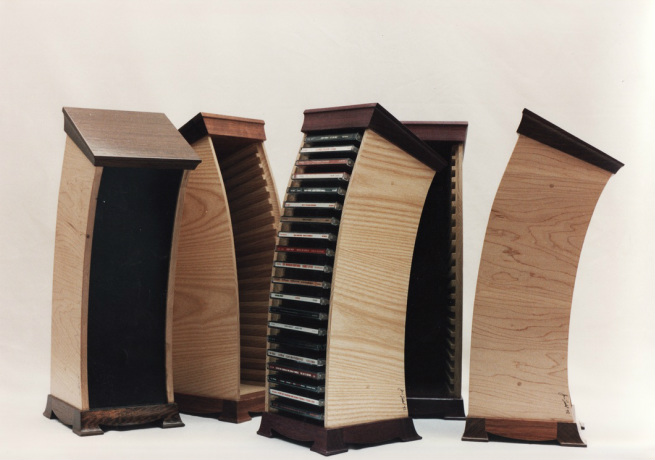 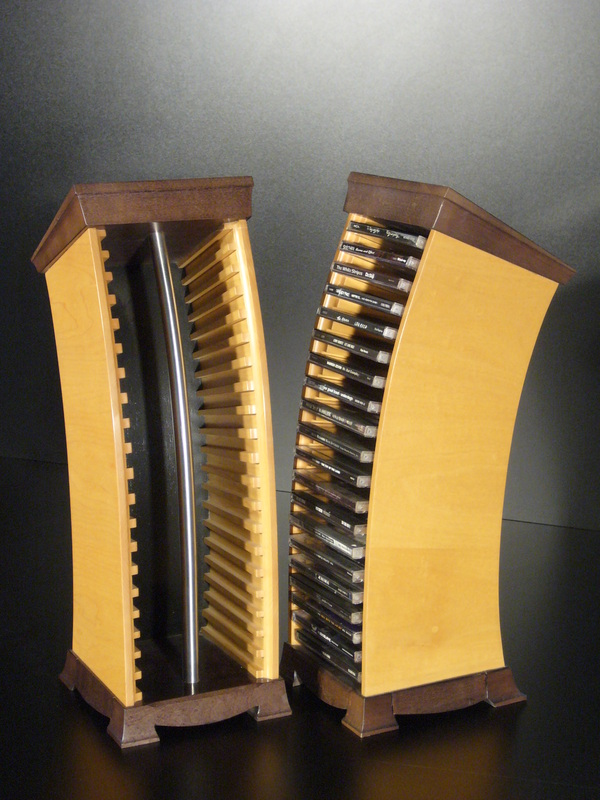 This one's good, get a beverage and sit back...

Hey, remember back when it was a big deal to own 20 CD's? Ya, think waaaaaay back. (Oops, I just lost my 19 and under audience.) Well that's the era (the week actually) when I was inspired to make a CD rack to proudly display them. From a marketing angle, it was actually a good idea, I think, except that by the time I had only progressed to the final sketching phase of the design (the end of that week), most people then needed room for more than 20 CD's. Hmm, Ok, so it was then quickly renamed "Top 20 CD Cabinet". (That would be "Marketing Adjusting to Trends in Technology  101" I suppose.)

The inspiration for the design for the 3 main parts came from 3 places:

First, for the mid section, I had seen how the typical solutions were filling peoples' living rooms with cheap, shaky, boxy cabinets that gave the impression that the music encased in them was also cheap, boring and restricted. (That doesn't describe the kinds of music I personally listen to.) Right there, I was on a stubborn path to make something original, expressive and highly functional (-- something that would cheerfully bite me in the butt in many ways later.) I wanted to create a table top piece that had a free form arch to convey the natural body expression a singer makes when they are delivering a powerful phrase; a bit back on their heels, head starting to tilt back.  I remember that as I was drawing the side view, working out the spacing to make the slots radiate out evenly, I started seeing the feel of this organic curve all around me...  I could see one in the French curve in front of me on my desk, there was one in the tulip there on the other side of the park, it was on the front fender of that car that just went by, and it was there in the build before the final chorus in that song on the radio.

Second, for the base, I was always interested in how some old furniture styles had references to animal parts, like Chippendale's claw and ball foot. I wanted to make that same sort of reference by starting with a stereotypical colonial style base, but swooping the back leg out like a dog's hind leg, and then give the whole base a more cartoon feel. I was quick to work out these lines after still witnessing how furniture showrooms were trying to sell / tell people how to expect furniture to look. The 5 pieces in the base turned out to be quite a bit of work, with all the machining of non-geometric curves and hand sanding in hardwoods like wenge and bubinga.

Third, I wanted to again poke fun at the serious and elaborate furniture crowns on period pieces. I had it mostly worked out, but using the same sort of translation I did with the base wasn't enough to complete it; I felt that there was some other reference that was tugging at my brain. Then it hit me... there was a portrait I saw in art history class years before at Humber College. It was a side profile of some proud guy that had been hit in the top of his nose with a sword in battle, and because he was so proud that he had marched on in battle, he wanted the painter to use this direct side profile to get a clear view of this notch in the guy's head. It's funny what sticks in my head, because as I chuckled at the story in the classroom while staring at the slide projected up on the wall, I remembered the guy's hat. It was this red hat that had sort of a flat top, tilted back... fast forward to the continuing design process...  I went to the library to find the image in a book (dating myself again) with the card catalogue and my internal search engine, and I finally found the "Portrait of Federico Montefeltro".  A librarian gave me the appropriate scowl when the whole library heard my glee in finding it. My eye quickly rescanned the curves I had seen once before and I resaved it to my wet drive. I got home to my desk and with a bit more cartoonification, the drawing was complete. I could then start figuring out how I was going to make it.

So there it is: the culmination of seeing boring furniture for too long, a dog's leg, an Italian renaissance image, a bit of Bart Simpson... and that's what I call the design process.

But wait, here's the best part:

I took a few "Top-20's" into a great gallery in Burlington called Ad Axiom.  Karen, the owner, was a great supporter of the arts and had great appreciation for the effort that I and others were putting into their work. As my quick presentation turned into a fun discussion, a lady walked into the gallery and as she was scanning the gallery from one spot, she quickly commented on my CD cabinet: "That's not art, art isn't functional, that's as functional as a toilet paper roll holder, this is an art gallery!"...   Wow.  Karen and I looked at each other wide eyed, daring the other to laugh and let the lady leave and get in her car before we reacted. That experience was so funny and sad and inspiring at the same time.

Sooo, I returned a week later with "10X". It was the now familiar CD cabinet, but this time it had a stainless steel pipe down the middle of it, to make it... non functional.  Karen got it without explanation immediately. "10X" was the title because the price was ten times that of the functional version. (Hey, it's art right?) It obviously made quite an impact on her because she talked it up to everybody that came into her gallery, and before I knew it, my stock of 10 "regular" Top-20 cabinets were sold in a week.  Hah!  There's some kind of sweet justice eh?!  Dangerously inspiring though.

I wish there were more galleries like Karen's still. She made a very good name for herself, and periodically got the proper recognition for her part in the art world. Every time I came in to show her a new piece to possibly "push" on her, she always gave me great respect for being someone who was weathering the constant storm.

Additionally, you see that stainless steel pipe with the perfect bend? Well, as I was planning "10X", and was going through the motions of making the single (but non-functional) piece, I was eventually at the stage of working on the pipe that would finally make it... art.  Without much thinking, I wandered over to the drill-press to insert the 5/8" pipe into the chuck to slowly spin it and work it with 400 grit wet sand paper up and down to pre-work the finish before I figured out how I was going to bend it.  Well, as it was 2:30am, and I was not sharp enough to remember that I had recently set the speed on the drill press back to full speed, and therefore without it being supported at the bottom, it picked up speed and quickly a slight wobble turned into a flare and the pipe bent out under the centrifugal force and hit me in the hip like an aluminum baseball bat. Aaaaaaah!   $#*%*!!!

The steel broke loose from the chuck when it hit me, and there I was lying on the concrete floor alone in the middle of the night, staring across the floor at a bent piece of stainless pipe resting 10 feet away from my new vantage point. I didn't move. I couldn't. I just lay there for a while staring at that piece of steel. When I finally pulled myself up from the sweat soaked concrete, I picked up the stainless piece and realized that it was virtually the perfect bend I needed, created by the near fatal accident. Is that some kind of sick poetry or what??!  Since then, my late night practices have changed dramatically: absolutely no moving parts if at all impaired by sleep deprivation or otherwise. I could have been gored if the pipe hadn't swung out completely to make contact with my hip bone; it might have traveled an easy route through my innards and made a nasty mess for my then studio mate to discover the next morning.

Going through the concentrated design process of the functional version and eventually the tongue in cheek version, I found myself dropped into a conversation, a debate and a personal small inner battle that continues to this day:  "What the heck is art anyways?" (If a piece almost kills you, does that qualify it?) Does it really matter what label goes on something or on the person who made it?

I continuously keep an eye out for other inspiring signs and similar discussions on the distinctions between art, design, craft, and just functional stuff that ends up getting treasured ...like a piece of art. (How many times have you heard someone say: "It's like a piece of art!"?) Tools and musical instruments often start the dialog I find.

"10X" is written on the bottom of the piece, but as I still happily own it, I don't think that would be the title if someone came wanting to buy it today.  (More than 10 now…) The pipe had hit my hip, but the whole experience whacked me in the brain even harder. Still does.

It’s over to my right, staring at me right now.   Hmm.