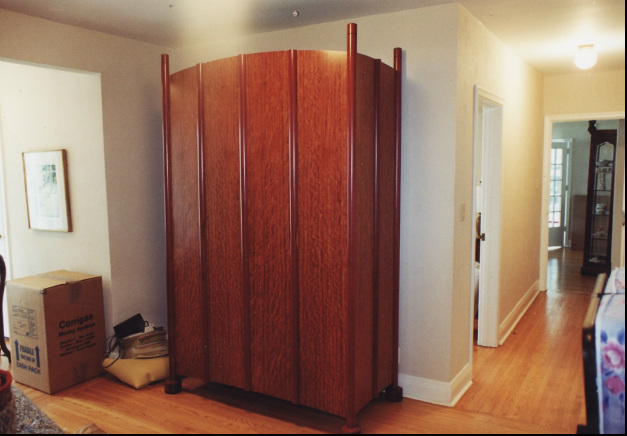 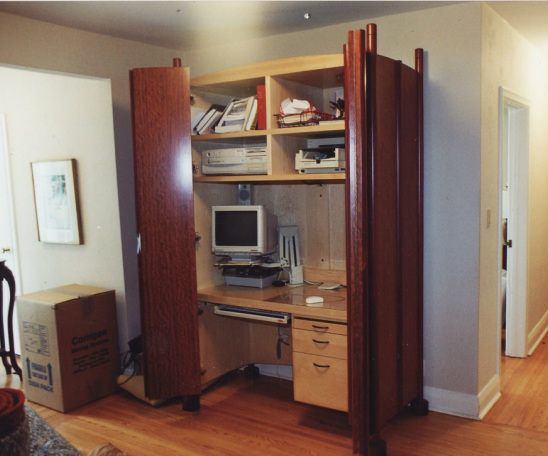 Explanation:  Delivering this piece was a back breaker, so there was a quick retreat to a warm bath at the end of the long day, without first digging for the camera. Therefore, no picture on delivery, no picture soon after, and no picture a few weeks later when I got that call. So that's why there's an actual mover's box in the shot!  ... the piece of furniture was quickly out of the house a minute later by 4 impatient, muscular guys.   At least I took these 2 snaps while they were tapping their feet.

What a piece to make. It gave me the opportunity to design a single office environment in a single piece of stand-alone furniture and work with some spectacular woods. I'd seen other commercial solutions on the mass market, but this was a chance to make a very unique piece that had an outer beauty and an inner calculated functionality.

Except for a few final details, my pencil sketch turned out almost like what you see in the picture, except it was designed to allow a final element of distinction in the choice of woods to be used.  I had a final meeting with my client to discuss such final details, and in the end, it was all left for me to decide. As I walked out their front door, I looked out at two flag poles set against Lake Ontario. There was a Canadian and an American flag. I was instantly inspired by the sight, and on the way home decided that the piece would now have these flag poles running through it, integrating the corner connections, the door seams and carrying through as a repeating detail on the sides and back. (The back was finished too so that it could be used in the middle of a large room, doubling as a room divider.) The poles and their bases were to be made of purpleheart.

The ripple in the lake was translated to a very similar ripple found in quarter sawn figured bubinga.  I found such veneer in big enough pieces of veneer to enable each panel to have an individual sheet.

It's very pleasing to find the recessed handles on the front of the nondescript tower of wood and swing the full length doors open to discover a concise workstation. The inside is veneered with a straight grain maple, which has a consistent non-distracting gentle grain. The recessed lighting inside also makes it brighter.

Although it has a discrete seam at its waist, the two pieces are individually still quite heavy. After being in a bit of a fluster to get over to the house and being rushed to take only 2 pictures, I was admittedly a bit satisfied to hear the movers grunt when they lifted the well built sections. Also, I had worked as a mover for 2 summers when I was a student, so it all seemed to be coming back in a strange circle.