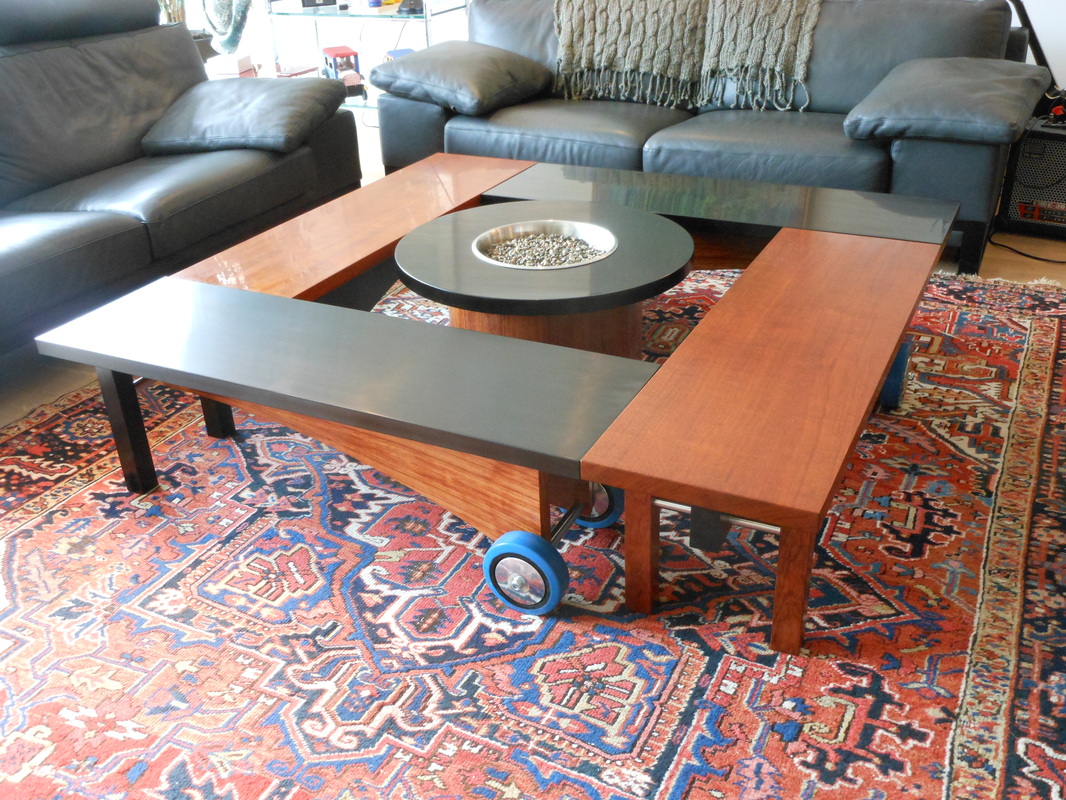 Round and round they go...

You never stop learning if you keep challenging yourself.

This was the fifth significant piece for Bob and Lola. I love making pieces for them because the design process is well known: Feed Jim a sliver of an idea, give him any size restrictions and then point to the place where the idea is going to land.
All the other projects I've done for them have been very creative and functional, but this time, I wanted to add a bit more quirk. I've always said that if you're going to have one piece that is a real conversation starter, a piece that is a bit more out there, it should be your coffee table. It's a place where people gather to chat and have a drink. It's not an office, no formal dining etiquette, just a place to relax and enjoy.

This three sided sitting area needed a large coffee table, but a single piece would end up being just a massive raft in the middle of the area, so a flexible segmented design was discussed at the beginning. The pieces were to act as coffee tables when grouped together or as benches when moved to another area in their expansive condo.
The design concept flew from there. Putting wheels on one end gave them an obvious visual indication that they can be moved easily. (Putting four wheels would be too obvious, too literal.) I wanted them to be seen as parked in whatever position you want, but ready to go. The finger groove on the underside is a satisfying discovery, confirming that "yes, you pick it up here."

Materials and Colour:
It's  a ying yang thing. This helps the pseudo-Japanese look of the whole project.

The colour of the Bubinga had come to mind as soon as I saw the rug. There is more figured Bubinga (usually with defects that would be distracting in this design), but I didn't want it to compete with the figure in the rug. It's super hard and absolutely beautiful. The curved Bubinga parts are veneer that matches the grain of the top slabs. The solid lumber for these top slabs came in the form of one massive plank 30" wide, 11 feet long. I got it at Exotic Woods in Burlington where they used a fork lift to move it. It was the biggest and most expensive single chunk of wood I've ever bought.
Me shopping there is like a kid in a candy store.

The charcoal leather sofas signaled the black to go on the Hard Maple. I used printer ink to dye it and give it an inert feel; a juxtaposition to the warm and lively Bubinga. Any other dye is actually dark dark blue, and you can see it if you put a true black beside it.

The blue in the rug was in the back of my mind for a while, and I saw the blue wheels online and suggested it to Bob as an amusement, and he actually went for it. Thinking that the blue was screaming a bit much, I was reluctant at first and ordered in some grey and black wheels. As I started preparing the connection point for the wheels, I started to think that they looked too plastic, too small and too dull, .... too safe. I ordered the blue ones and smiled when they arrived. They would add that bit of quirk that I was looking for. I told Bob that I had made this change and he was happy that I was not satisfied with the original idea and had gone in this more funky direction.  I really like how he trusts me to make the final decision, or even change my mind if something starts to look different once it gets to the full scale 3D piece.
I made another executive decision soon after that: I changed the center piece so that it was 2" higher than the other four. This would give it a very slight pyramid feeling with attention toward the middle.  I pointed out this design decision on delivery day, high approval again.

The finish consists of 11 coats of brushed on Waterlox.  It takes a long time to dry compared to lacquer, but it is much more durable and resistant to water, alcohol etc. Great stuff, however, it takes much more baby sitting to make it work, especially when flies seem to like doing the back stroke in a freshly applied coat. The final coat was rubbed to give a super smooth satin finish.

Hi Jim,
I must tell you that every piece you've made for us gives us great pleasure
on a daily basis.  The coffee table is stunning - so many details that
make us  want to just be near it.
It has a bit of a Japanese feel to it so we intend to put a bonzai plant in
the middle part. Every piece of the table is a work of art in itself and could
stand on its own.  You are amazing.
Thank you for making out loft space so aesthetically pleasing.
There's  only one room left in the condo that has not been graced by your
brilliant  artistic touch.  We'll have to do something about that. Let me
know when you can get to work on a last piece (or two).
Thank you so much for doing a magnificent job.  It took us four years
to figure out what we needed for that space and you hit the mark perfectly. We
couldn't be happier.
Let's talk again very soon.
xox Lola


Once again, the design prototype ends up being the final successful one of a kind piece. (Think you could order a car like that? Ha.)
I'm still buzzing as I write this all down. Very cool project.