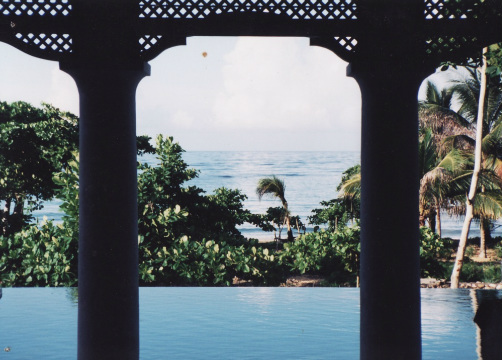 The daily view as I installed the project. Not bad. 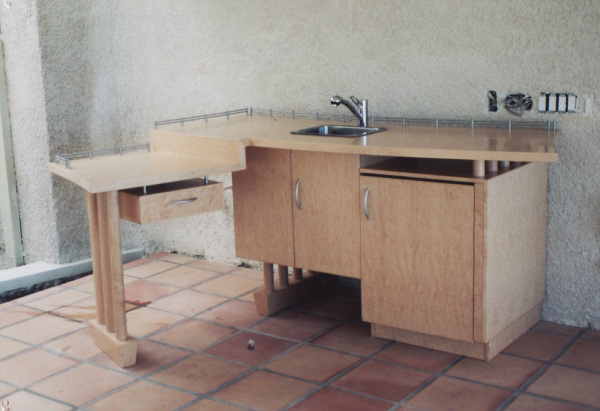 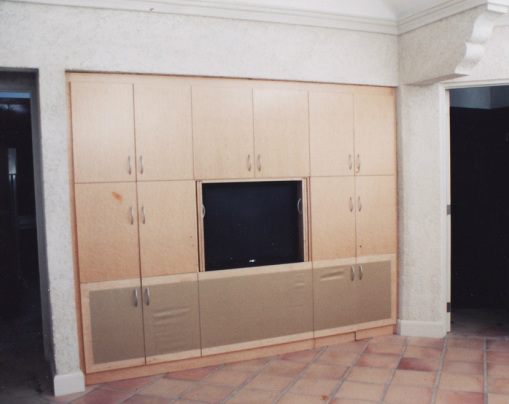 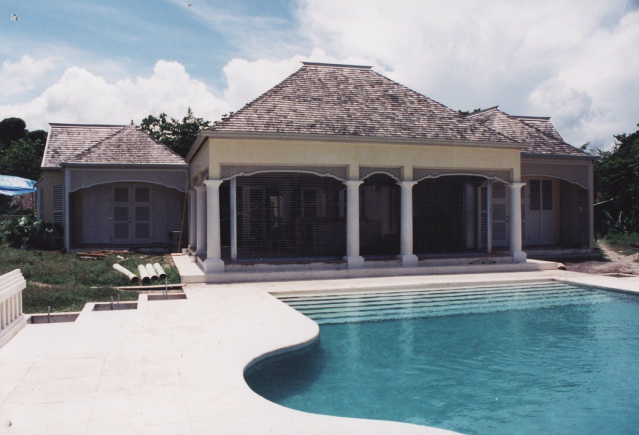 The reverse view of the "job site".
The whole job could've been made into a movie with all the drama and the length of the project...  so it seems appropriate to make an equally long entry:

Year 1993. A man who owned a high-end travel agency got in touch with me to redo a room in his office building so that it would go from a one man office, to a one man - one woman office. No problem! (Oh there, the Jamaican reference has slipped out already.) It was a challenge to squeeze the space without it getting too cramped. I talked with the two people to get an idea of how much space they needed for their movement and for their storage needs. Lots of ergonomically shaped counters and strategically placed sound absorbent panels for 2 phone conversations, lighting, shelving, file drawers, cord management... It worked out great I thought. But when I finished installing it, I got a funny feeling that all my effort was not going to be appreciated for long, and I was right. It turned out that this was just a test job, before I got the big one. I never even got a chance to take a picture of my carefully calculated office configuration before the room was gutted and replaced with a single table to act as a mini-conference area. It was never going to be a 2 person space, it was just a test. It wasn't an overly expensive office job, but it was pretty weird to see the sweeping curved counters and fixtures poking out of a dumpster in the alley weeks later. I got paid, I guess it wasn't my business what he did with it.

The main act was going to be outfitting much of my client's villa in Jamaica which was still under construction. It needed some simple but well built dressers, standard shelving and then also a few stand out pieces. One of them being a wall unit that would house stereo equipment galore, a karaoke machine, TV etc. It was a lot of gear and it needed to be designed carefully for spacing, within a plastered cement opening. I contacted him soon after I got the blueprints for the place, and asked if he could get me the finished opening size for this wall unit, because if it was 1/2" off, or more, the piece wouldn't fit. There was a pause on the other end of the phone, and then he slowly explained that there had been more than a few contractors on this job that was already years in the process, and the blueprints I had were not current.  I asked if there was someone down there who could call me soon with dependable dimensions, and again, it was a "no."  Then he asked me: "What are you doing tomorrow?" ... "Uh, working, the usual, why?"  ... "There's a flight for Jamaica leaving tomorrow at 3pm, find your passport and your tape measure."  My obvious reply: "No Problem!"

I got home quite refreshed and got right at the whole project. Maple was picked as the main wood for the project because it was something that you wouldn't ever see on the island, and birds eye maple was obviously more exotic, so it was used for the front of the wall unit and the other significant pieces. The highest grade of lacquer coated everything everywhere to protect against the humidity and termites.  Due to the continuation of the revolving contractors, I didn't get down there to install for another 18 months. Crazy. I was told that the new contractor on site had everything I'd need, "so no need to bring any tools."  I asked: "So there's a table saw on site now?" ... "Yes."  ... and nail guns, compressed air, drills and everything??" ...  "Ya ya!, Everything!, don't worry!"    Soooo, I only packed my trusty Japanese hand saw, a trim router and a couple of favorite hand tools, and my suntan lotion and set off."  ...

Act III: "Installing a Villa full of Furniture Without Tools."

It should have been done in 4-5 days with lots of time at the end of each day to lounge around the poolside bar and work on my sunburn, but no. I ended up having to cut lengths of wood with my failing Japanese saw, and then clamp a straight edge (from the remains of my crates) and use my trim router to clean up the saw cut. With 7 days available to complete the whole installation, it took 6 long days in the humidity. The Jamaican labourers called me Superman because I just kept going, fitting all these fixtures to the walls and installing cabinets with tired hand tools.  Then, they found out that I actually made all the stuff too! Then they thought I was an alien! Some of them were actually scared of me I think.

The villa was surrounded by an 8' stone wall with 5 highly trained German Sheppards who were disciplined not to eat a hunk of meat flung over the wall laced with poison.

The wall unit went in fine eventually, except the fabric on the doors that housed the speakers had gotten stretched a bit after sitting in my crate for a year or so. I managed to iron it out with a clothes iron I got from my all inclusive hotel. Once again, I used left over crate parts, this time as an ironing board. These parts were disappearing everyday; apparently becoming parts of peoples' homes.

Another significant piece was the bar (pictured) which had a flowing counter top that "bounced off the wall" and continued over top a cabinet housing a sink and bar fridge. The flow of the top was to look like a visual continuation of... the moat that was running through the great room . That's right, who doesn't have a moat with a fresh water stream from the nearby mountain tops, going through their living room?? Just stunning.  Standing at the bar and looking to the right, there was a stellar view of the ocean with an invisible edge on the pool. (See pic.) Yes, that's what I had to look at every day I was there.  I like the stainless steel "guard rail" I put on the back of the bar's birds eye maple countertop, probably came in handy.

There was also a concave liquor cabinet I created to go above the bar, but due to new electrical fixtures, I wasn't able to slam dunk that piece up on the wall and get a picture, drats.

The 6th day was actually not too bad; I did manage to gear down a bit before the 11th hour. I finished installing mid afternoon and made my way to a tin shack restaurant off the beaten path and had the best meal of the week: goat's head soup, complete with mysterious bits of matter in the broth. This soup and the local people were a refreshing change from "the compound" where I was assigned to stay. It was a chance to get one step back closer to reality after working in an environment that was being created for movie stars.

Many years later now, I'd do some things differently, but I could take another job like this one. Some time in January would be fine to go and measure openings.  Nooooo problem.