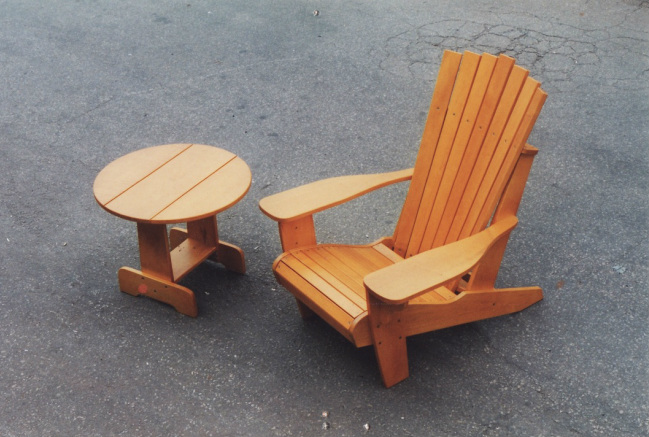 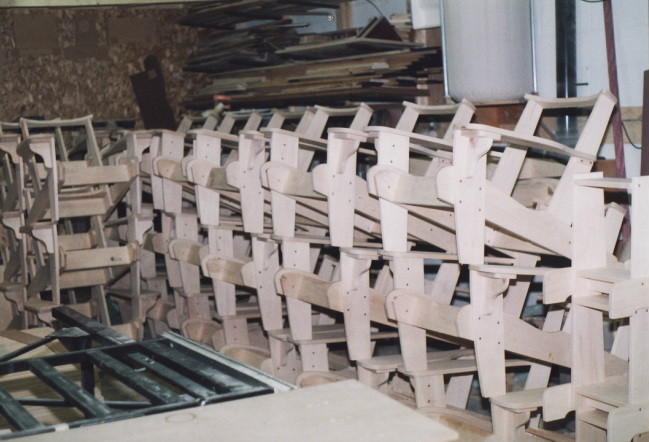 When I was working out of the 1200' industrial unit in Oakville, I used to get some crazy requests and inquires coming in from my yellow page ad. I found that 10% of them made sense, and 10% of those turned into actual business. One of the calls I got was from a distributor of teak garden furniture who needed some Muskoka chairs made to close a huge deal for Mount Tremblant. They were 6th in line subcontracted for outfitting the new village, so that meant I was 7th, which meant it was hard to get a straight answer from whatever designer or bean counter was actually making the decisions.

When "they" first said that they wanted the chairs coloured a bright yellow, red, blue and green, I mentioned that you'd want a light coloured wood for a dye to soak in and show well, so pine would be one... or... maple is light and is more "ski boot proof" I added... "Maple it is!" was the quick reply. OK... although maple isn't at all resistant to decay like pine, it turned out they only expected 2 years of service out of the chairs.

So 70 chairs and 35 round 24" tables to go with them. All I had to do was give them a price, and I wish I had quoted much higher it turns out, they would've taken it if it was over the moon; they had to fulfill the order. Oh well, that's business; live 'n learn. I hired 3 Sheridan students to help me for 3 weeks, and we got it done. The thing that really saved my bacon was that the unit next to me became vacant at the perfect time and I was able to rent it for one month to do assembly and store the final product.

The design was a mutation of 3 mail order plans I got. I made adjustments for strength, machining, ease of assembly etc. I've still got the jigs to make these, and as soon as I can come across a cheap supply of exterior grade wood (like recycled teak that can be left unfinished), I'll bang out a bunch for our back deck. Unfortunately, it's not even on the "honey-do" list; I might have to somehow bump it up. They're fun to make when you have all the patterns and jigs. Lots of screws though!