The Twin Cabinets of 911 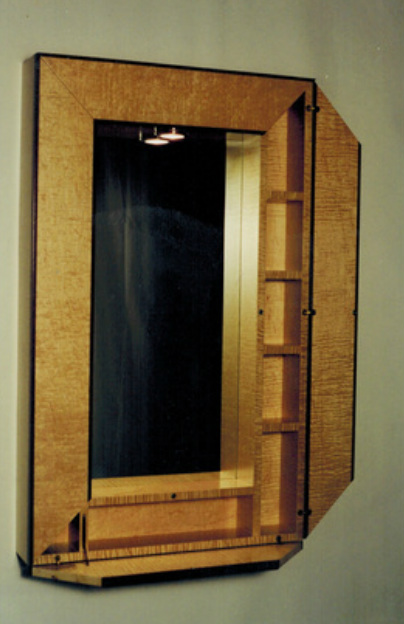 As I'm writing the stories behind these pieces, I'm realizing that in all cases, the final impression that a commissioned piece leaves on me is based largely on the customer and the interaction I have with them. I suppose it's natural after someone takes the time to find me, trust me, get excited in an evolving idea with me and agree to pay me fairly to create the design. It's is a leap of faith on their part that I don't ever take for granted.

In this case, a local writer commissioned me to make this "Shadow Box" for her. It's a functional mirror with halogen lighting, and also a series of carefully spaced  compartments behind concealed hinged doors for storing small things.  It is veneered with curly maple, with solid purpleheart edging to make a dramatic graphic border. As I was designing it with an emphasis on making the proportions really sing and make the grain punch out with a rubbed clear laquer, Jackie became so much more excited about the whole small but precise project that she decided that her daughter in NY, NY needed to have a twin piece. No problem.   I was about 3/4 the way through making both, when Mother called Daughter and convinced her to come up for an extended weekend visit, with the excuse that they needed to visit the maker of their pieces which were being assembled. It was a beautiful early fall day when they came up; we had a wonderful time standing around in my studio drinking coffee, looking at the wood grain selection and all, enjoying the breeze coming in the open garage doors, bantering on happily.   That was Sept 10th 2001.
Early the next morning, Jackie's daughter Jessica set off back to New York City to her job in one of the twin towers. Around 10am, as she was approaching the border, she heard the news on the radio and turned around safely.
Both identical pieces were completed shortly after with absolute precision. I installed Jackie's, and shipped her daughter's to be installed by her trusted friend.

In the creation of The Twin Cabinets, a life was saved from The Twin Towers.

My wife Judy and I went over for a dinner to Jackie's one night a while later, and I paid a visit to her shadow box again. As I entered the beautiful bathroom,  I noticed that the mirror and the cabinet of the shadow box were perfectly clean and dusted entirely.  I then opened the 4 hinged doors to find that the compartments were also perfectly clean,  and empty.